Justin Glibert was selected as a Pioneer with Florian and Jay in October 2019 for their work building a fully automated AI to handle e-commerce returns and refunds. Soon thereafter, he started work on Foundation, the first factory on the Moon, which he presented in a Pioneer livestream to prominent crypto investor and Electric Capital founder, Avichal Garg.

Today, we help announce his latest venture called 0xPARC, a non-profit research organization with a few million dollars in grant money to invest in application-level tech built on Ethereum.

Read our interview with Justin below:

You’ve lived many lives since your selection as a Pioneer. What is the sequence of events and milestones along the way that have led to today?

When I was 16 the most ambitious thing I could picture myself doing was to go study abroad. And only because I was scrolling on a French gaming forum one night when one kid was flexing his Southampton University offer on the “Recent” thread. I didn’t even know one could do that.

My high school didn’t like the idea that much, “Wasn’t Belgium good enough for me?”

When I started at the University of Edinburgh, I fell into the Hackathon craze: went to a lot of them, won a couple, and started to like “building products”. At the time my dream was to build a successful software business, get into YC, and move to San Francisco. In my head most “YC worthy projects” were SaaS. Didn’t matter if the business was boring, you were a Founder Goddamnit.

My plan was to get an internship in SF and break into Silicon Valley. Somehow, a YC startup extended me an offer to do research engineering in their small team of four. On my seat in my transatlantic flight I was anxious. The other people at the company were all from Ivy League colleges, including the other intern.

I had a good time there, built some confidence, but felt like I hadn’t made enough of an effort to build my PeRSoNal BraNd (I still cringe at this). I remember writing in my journal on the last day of my stay in California that I needed a plan to be “noticed”. My co-intern had a cool Twitter account. I didn’t have a Twitter account. I wanted to be someone. I wrote down: “Become a Pioneer!”. When I came back to school in the winter we climbed the leaderboard and made it to the private Slack in November 2019. Another boring B2B SaaS. It had good tech though.

Applied to YC that winter, did interviews, and got rejected. Geoff Ralston told me to go back to school.

Pandemic hit. I got obsessed with cellular automata and self replication. Convinced myself that I had to do something hard. Something that would change the world. Better asynchronous communication software isn’t gonna change the world is it? Building self replicating factories on the moon felt like the right mix between plausible and crazy. Pause for comical effect.

We had a good plan. Investors liked us. We won the Pioneer Livestream. I was ecstatic. Well... ITAR requirements, US citizenship, and the prospect of spending all of my twenties in a lab made me backtrack. I gave up. Turned down the money we were promised. Felt like a big impostor.

December 2020: Scrolling Twitter as one should. Saw Dylan Field furiously retweeting Dark Forest. What the hell is that game? I read the code, read the math, progressively growing more excited. I must get involved in this thing. After a short investigation I figured out the group of people behind the project. I DMed one. We have a Zoom call. “Can I work for you for free? I am pretty good at this whole software thing”. We landed on another possibility: I’d come to Mexico with them to work on Dark Forest for 2 months and see if I like it.

Had the time of my life in Mexico. Didn’t work much, but made good friends. We ended up deciding that me joining as a cofounder was not a good idea for various reasons. Straight after this I started working on a new crypto native game: what if someone were to put an infinite timeless Dungeon Keeper on-chain? I had always wanted to make games, but never felt like being good at math and physics was a leverage. I was dreaming about the Id Software days, when writing a 3D engine was a work of love and ingenuity.

I convinced Florian to come join me in Seattle to work on the game. We spent two months with the DF folks doing vision quests in the Rainier National Park, building a game engine from scratch, and pushing the medium as far as we could.

Things got slightly crazy when we left Seattle. I stayed in London a bit, but then decided to go to California. I stayed in Croatia for two weeks furiously reading all of Raph Koster’s work, convinced that people building “the metaverse” don’t get it. Our team grew a lot, the objective switched from building a game to building an engine. We decided to create a research lab with the DF people, 0xPARC. Companies can only get so big, movements and values can get as big as society. Could Internet, Inc even have been a thing?

What is 0xPARC and why does it matter?

0xPARC is a research lab supporting application-level innovation on Ethereum.

It’s brand new. We were doing something similar in an informal way before 0xPARC was instigated. The Ethereum Foundation or CTL (the entity who was developing Dark Forest before it was transferred to 0xP) would give grants to support various open source projects.

A couple of months ago, we went ahead and decided to formalize it as a public benefit corp. Its mandate is to distribute capital over two years to projects advancing the state of the art at the application layer.

Why structure it as a research lab, as opposed to a company?

We want to get as many “founder” type people as possible to work with us. With a company you can only get so many of those, given the way equity works. Here each project we support has complete control over its destiny — financially and operationally.

One outcome of structuring it this way is that we can access a lot of funding from donors. It would be hard for a for profit company to raise millions of dollars in equity free grants.

What makes your scope of work unique?

Being a capital allocator when there is no upside for yourself is very untraditional in technology. I need to set my ego aside and give maximally effective dollars to the right people at the right time.

Thanks to the flywheel we have been building over the last 18 months, we get to meet — and fund — people from an interesting intersection on the Venn diagram of Web3 builders: technically excellent and strongly value-driven folks. The signal to noise ratio in crypto makes it such that this is really rare, and I am very grateful for this.

What will it take to be successful and how do you measure success?

Our ultimate goal is to create a vibrant ecosystem that survives us. The bus factor should be infinite. We must be very thoughtful about incentives & values: grantees should feel free to disagree with us, administrators need to give up their ego to be effective, and we need to explore creative ways to build a tight knit community over the internet.

Personally, I dream of creating a virtual world with simple -- yet emergent -- rules living independently from its creators. A place for creativity on the internet, where humans and machines alike are welcome to participate. A place that could become a testbed for governance and economics experiments.

Crypto is not hardware driven, one does not need to wait for the deployment of a specific hardware technology to unlock opportunities. And that is very much unlike AI, VR, and the other big tech industries. We have the ability to build the internet the right way, with radically more interesting outcomes today.

How much have you raised to date and who are the grantors? How did those relationships form?

We raised a couple of millions from value aligned grantors who know there is no potential upside for them. These grantors include the Ethereum Foundation, xDai, Gitcoin, ETH Global, Gather Town, and more. We know most of those people from previous projects. It is a long history of building trust and demonstrating value alignment. In crypto, winning in one turn is usually an option on the table. Aiming to be someone who consistently refuses to do so — for good reasons — is one way to build such trust.

What companies or organizations do you and the team look to as inspiration? Which do you fear, if any?

What is something weird or unusual, not mentioned above, that you’ve built or done earlier on in life?

When I was 17, I worked out a couple of deals with my high school teachers to get me a fake (but official!) report to give to the British universities I had offers from. There is no standard exam in Belgium and my school was one of the hard ones. Nobody had ever gotten the grades the universities were asking for, so we had to get creative.

How has Pioneer been most helpful to you?

Giving me a structure and support to experiment. The Pioneer team always took me seriously, and never tried to shoot down any of my ambitions. I am grateful for that. Pioneer is wholesome, much unlike a lot of other communities around — especially the ones that are transactional with equity.

What is your advice to others who are tinkering on a project in the Tournament?

What about the future gets you most excited?

Finding more creative ways to work on interesting projects with the people I love. Especially if it goes in the direction of making the internet more weird and generative.

Being a craftsman in a supportive community is the one thing that matters to me now. Startups are just excuses to build stuff with your friends. 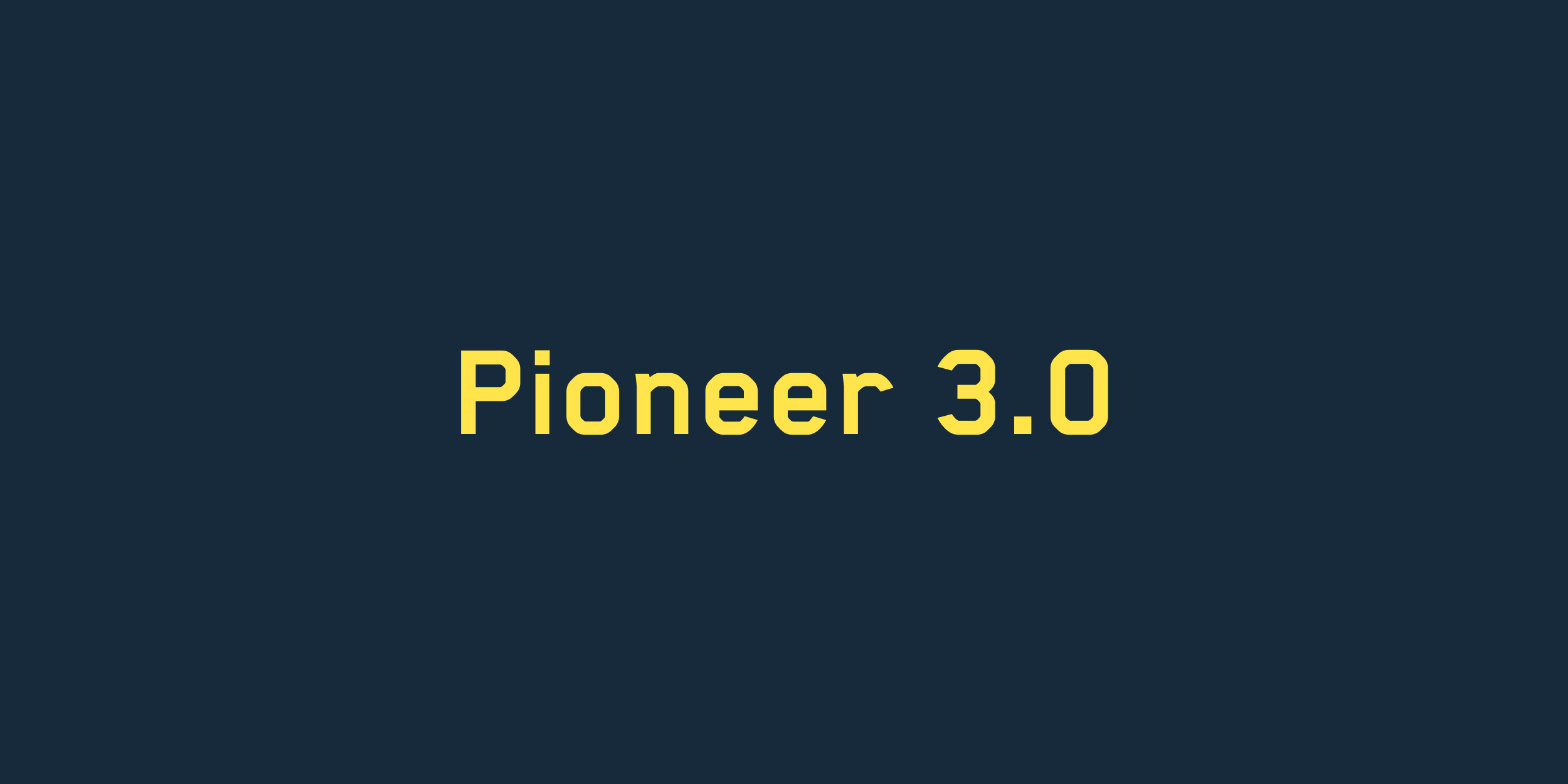 Pioneers can now choose between 2 options: 1% of your company to become a Pioneer, or 2% to also receive an additional $20k in funding.

Introducing Pioneer Codex: answers to the most common questions from thousands of founders from Idea to Seed.